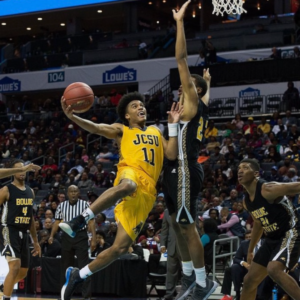 Robert S. Davis III is the Director of WINTARIAN Athletics. Robert is a 2018 Cum Laude graduate of Johnson C. Smith University in Charlotte, NC. That same year, he was the CIAA college basketball player of the year. The CIAA is the oldest African American collegiate athletic conference in the United States. After receiving his degree in Sport Management, Robert joined the JCSU coaching staff led by Hall of Fame Coach Stephen Joyner, Sr. The following year he was signed to play professional basketball in Europe. He played in Cyprus and Portugal before returning to the United States as a result of the COVID-19 global pandemic shutting down international league play. In 2020 he launched the WINTARIAN Athletics Blacktop Basketball League at Celebration Church in Columbia, MD. The inaugural season hosted 70 teams in 4 different divisions. In 2021 a vision was born for WINTARIAN Athletics to expand to include fitness training and nutrition coaching. March 2021 will see the fulfillment of that vision.